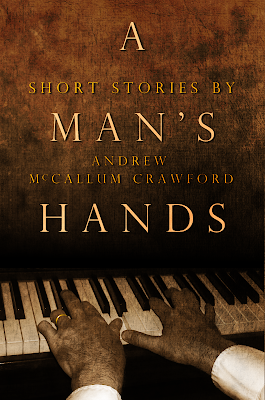 The latest review of A Man's Hands:

"These stories are about obsession. They're about men who want what they can't get. But they're not obsessed with money or fame or youth. They're obsessed with that perfect almost-relationship from the past. That precious moment they threw away, or lost somehow, whether because they stank with drink, or because another man was on the scene, or because fate just intervened. Secrets are hinted at. Dark things that linger in the memory - but not necessarily in the memory of that woman from two decades ago who also experienced it. The fact is, they can't turn back the clock and regain that lost ideal, and, slowly but surely, the men in 'A Man's Hands' come to realise that.

Andrew McCallum Crawford's characters brood and despair as they wrestle with the dark places in the human psyche, yet there's humour in these stories, too, especially in the wry Canny Cyclist. I think overall my favourites were Player, Chicken Soup and When Iron Turns to Rust. But they all have something to recommend them. The reader's always safe in this man's hands."
- Carol McKay

A Man's Hands, my second collection of short stories, is available in the UK, Canada, Germany, France, Italy, Japan, Brazil and, of course
the USA (and all other territories).
Posted by Andrew McCallum Crawford at 23:06