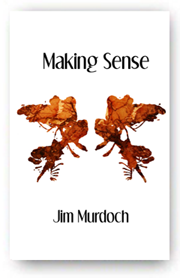 I don’t read as much new writing as I should. I’m currently rereading some Kelman and Irvine Welsh, tried and trusted, although they make strange bedfellows. There is so much new writing out there that sometimes it’s difficult to make a choice. A couple of years ago I was introduced to Jim Murdoch's work, and have subsequently published some of his poetry here and here on Wee Fictions, so it was with anticipation that I received a review copy of ‘Making Sense’, his new collection of short stories. The stories Murdoch has included are, in the main, first person narratives – monologues, if you like. Indeed, one of them, ‘Funny Strange’, one of four stories written in a variety of dialects, was originally performed on stage. This, I find, gives a certain form to the collection, in that the reader soon gets into a rhythm. As I read further into the book, I began to wonder how Murdoch managed to create nineteen distinct voices for the nineteen stories gathered here.

Murdoch is best known for his poetry and novels, but it’s clear from the outset that he knows what he is doing with the short story form. The flow of ideas in the characters’ heads manages to keep the reader engaged. The first story, ‘√-1’, is about a man who is obsessed with numbers. He is regarded as the ‘local eccentric’ and wants to tell us why he ended up visiting his doctor. The first line of the story is

It was not a nervous breakdown.

which immediately grabbed my attention. A nervous breakdown? Denial? It is followed by

Those were the six words he used but that was not what he meant…Often we say things we do not mean or say one thing and mean something else entirely…As a doctor his words would carry weight…We trust them because we have to trust someone or we would all go crazy.

The main character, Thomas, relates everything to numbers. They are the crutch he leans on:

Mathematics is the language of the universe. Numbers never lie. They never let you down. So many things in this life disappoint.

After some digression, he gets round to telling us about the visit to his doctor:

I was not taken on time. The wall clock in the waiting room was wrong but even taking that into account he was still four minutes late and seven minutes late by my watch which I had checked with the BBC only that morning. It would be too much to believe that the BBC had the wrong time.

There is so much in this story, but there has to be. Thomas is an obsessive. As in all of the stories in this collection, Murdoch makes some excellent observations:

He frowned and tapped his pen on the desk. It was an old Parker 61 fountain pen in burgundy…it must have been the first bars of a tune because in Morse code it was nonsense…You cannot attribute old-fashioned values to someone simply because they write with an old-fashioned pen.

I have found that there is an order to things and there is never anything left after the point if you do your sums right.

That last part is the crux of the story. ‘…there is never anything left after the point if you do your sums right’. This is Thomas’s problem. He needs numbers to make sense of his life, and he knows that if he tweaks them in just the right way then everything will make sense. Don’t we all do that to some extent? I well remember studying undergraduate chemistry – it seemed that the whole laboratory were fudging our titration results because, having boned up on the theory, we knew what the answer was supposed to be. But life isn’t lived under laboratory conditions, and there is no textbook to crib from. Why would someone feel the need to fudge their results, to make things come out the way they, for want of a better word, should? Is it to avoid the truth that we are all just winging it?

Thomas eventually has a rather public nervous breakdown – he has a vision of an angel who speaks the language of numbers. Is this the divine personification of √-1? That’s the way I choose to read it.

One can’t help but notice the variety of voices and themes in the stories. In ‘Poise’, the unnamed narrator has a reverie about a woman on the bus. The narrator harbours feelings for the woman, but can’t approach her. Murdoch strings the reader along nicely here (I won’t give away the ending) but again he touches on themes which are much deeper than you might assume on a first reading. Interestingly, the woman appears later in the book – in the story ‘Islands’ (a number of stories have female narrators) – and so we get to see things from the other side:

Sometimes, on the bus to work, I get the feeling I'm not alone. Of course I'm not on my own—I 'm surrounded by thirty or forty people—but none of them are with me. Only sometimes I get an inkling that feeling might be wrong. I look for Billy but he's never there.

In ‘Objects of Affection and Intention’, a young woman, Eve, finds out, quite graphically, that her boyfriend is gay. Sexuality features in quite a few of these stories and Murdoch is good at writing about it – one of the reasons he’s good at it is because he knows how to make it funny. Better than Irvine Welsh, I would say, who lays it all on rather too thickly for my 47-year-old sensibilities (although I thought he was the bee’s knees when I was 27). Eve tells her mother that she has broken up with her boyfriend and immediately gets grief:

…she knew I needed to be out of the house for something to happen with my life.

She decides to take art classes and, after a few weeks, poses nude when the model doesn’t show up. She becomes an object for the other students in the class:

Her teacher asks her about her painting:

‘What’s the subject?’… ‘A skull and some pears?’… ‘No, no, no. They’re the objects. You are the subject of everything you paint. It’s through these objects that you get to understand yourself.’

‘Jewelweed’ – for me, the highlight of ‘Making Sense’ – features a man talking about how he met his schoolteacher wife. I think Murdoch should have placed this as the last story in the collection. There is humour in all of the stories, as well as depth, as I’ve already mentioned, but some parts of this story are absolutely hilarious. The theme here is different from elsewhere, in that a man is trying to make sense of his partner. This is in contrast to most of the other stories, where the protagonists try to make sense solely of their own existence.

Have you ever caught a glimpse of yourself in a mirror and seen yourself for what you are, seen beyond the façade? Vivienne had. I still catch her looking from time to time staring at herself with a kind of question mark hanging over her head. I asked her once what exactly she was looking for but she said she didn’t know because every time she looked it wasn’t there. She wanted to be more than the sum of her parts, not less.

Vivienne’s favourite plant is a Jewelweed:

The jewelweed…its common name is ‘touch-me-not’ and it’s called that because, like other varieties of Impatiens, its seedpods, when ripe, will burst open at the slightest touch.

I like the subtle sexual undertones of that. No undertones in the next part, which almost had me falling out of my seat laughing:

…if you’d said to me within six weeks she would’ve given up her forty-year-old virginity to me across her creaky kitchen table one rainy Saturday afternoon—accompanied by a recording of the BBC Philharmonic performing the final movement of Mahler’s Fifth Symphony at the Proms on Radio 3—I might’ve been shocked, but a part of me would also have been intrigued at the prospect…Afterwards – to be frank it didn’t take too long—we gathered ourselves together but when she took one look at me with my hands on my knees and my trousers still at half-mast, wheezing like an old bull, she burst out laughing. You know, that kind of infectious laugh that makes you giddy. I looked back at her hanging out of her dress—I’ll never forget the look on her face and I can only imagine the look on mine – and I was off too. I’m sure the rapturous applause of the Albert Hall’s audience helped.

What I most liked about this story is the way the narrator is made to analyse his wife as a means of analysing himself:

Nowadays, when I look at Vivienne I know I’m judging myself. I’m pretty sure many think I’ve settled whereas she’s dug her claws in and hung on for dear life in case her last chance slips away but it wasn’t like that.

This is a nice twist at the end of the book. When it comes down to it, this is what we all do when we are involved in relationships. We try to work each other out. Sometimes we are successful, but you can never really understand someone else completely. The main point of Murdoch’s stories is that we can never really understand ourselves completely, either, despite the internal monologue each and every one of us is privy to.

I realise that I’ve quoted heavily from the book, perhaps too heavily for a review of this length. However, I wanted to give you a flavour of Jim Murdoch’s writing as I believe you can only really appreciate stories as good as these by reading them. With ‘Making Sense’, Murdoch shows us what an accomplished writer he is. You can get a copy here:

Posted by Andrew McCallum Crawford at 19:22