Songs The Lightning Sang by Geoff Cooper - A Review

I have been reading a lot of poetry collections over the last few months. Many of them are extremely good. None, however, is of the same calibre as Geoff Cooper's 'Songs The Lightning Sang' (Calder Wood Press, 2010). Each poem in this work will affect you at an emotional level. This is not to say that it is a maudlin work - on the contrary. The book is a mighty celebration of what it is to be alive. This is Cooper's first collection, although it would not be fitting to describe it as his debut. One wonders where the poet has been hiding. It would appear that he has been patiently honing his craft, and, having mastered that craft, has now decided to give us a taste of his labours. This is a collection written by a man who knows exactly what he, and his poetry, is about. Take this, from the very start of the book. I will take the liberty of reproducing it in full:

And so it goes on, through ancient landscapes of mountains, cliffs, rivers. Cooper is a poet who is not ashamed to express his awe at the enormity of our surroundings. Nor does he shy away from the fact that we are minuscule in comparison. And this is his central theme: we live in a glorious world, and let us rejoice at our place in it. We are human, it is in our nature to look and to wonder. Not only this, it is also our place to try to express this wonder, whether in paint or in ink. Cooper is an admirer of many artists, Marc Chagall among them. He goes deep into the painter and the painting:

...There is blood on the roofs of the houses;
have no fear - it is only the blood of a painter -

... - Jews are not erlaubt
within the perimeter fence of a painting

Cooper is a poet with range. From the darkness of Village Painting, we move on to Red Fruit, where his imagination is allowed to run wild (though not uncontrolled) as he delights in Bonnard's Fruits Sur Un Tapis Rouge: 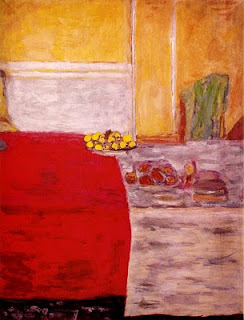 ...but a young girl I think is answering the door
...
She will walk beneath red parasols
through avenues vortexed with flame
shoulders bare to the gathering of stars

All of this is enthralling stuff, but it is when writing directly about human relationships that Cooper really sets the page alight. There is tragedy, yes, though not without humour. A Piano Player tells the story of an old woman playing Schubert down the pub. The punters are amazed, but:


...her boyfriend's
nose-down in the beer-mat pools, listening
to the lullabies of whisky in his head

In How it ends (for Debbie):

The collection ends as it begins, brilliantly. This, from The Explorer, in which Cooper makes it clear what he is all about:

...poetry, he writes,
...Must go so brave and deep
inside others, and beyond ourselves.
must puzzle out
what's furthest, hardest,
yes, poetry must seek out

All those other human worlds.

This is poetry that you will react to. And you will react to it, on an emotional, not on a visceral level; Cooper is a poet whose work calls out to the human in all of us. Come and look, he seems to be saying. Come and look, and rejoice in what we are. Open your eyes. Look all around you. See those mountains, see those birds in the reeds. Look at these colours, see what art we can create. Look closely. See the glory of it all. Throughout 'Songs The Lightning Sang', one can sense an almost tangible passion for words, and a passion for sharing the essence of being human. It is an essence common to all of us, and it is a passion that should be shared. Cooper acknowledges this as only a master poet can, being at once profound and accessible.

'Songs The Lightning Sang' is an outstanding collection. It is available at the link below.

It was so good giving Drive! an airing at the Fringe. But let me be clear - I am not a performance artist. The goal was to get the book out there and just let it happen. It is now clear to me - as I am sure it was at some subconscious level from the outset - that it doesn't work like that. It has to be seen to be out there. This is why I am so happy with the progress in libraries. Work there will continue throughout the following months. I could not be happier with the reader reviews the book has been getting on Amazon, but I feel that perhaps it is time to bring in a Scottish publisher to help with distribution over there. I have no complaints with the progress of the book so far, but there is only so much one can achieve on the Internet. A physical presence in bookshops in Scotland would help. If any of my blog followers have any ideas or suggestions, please feel free to post.

Available in the UK on Amazon.co.uk
Have a look at the reviews.
£7.24
Posted by Andrew McCallum Crawford at 21:29 No comments: