My first novel, Drive!, is available as a free download on Amazon for a few days. Do take advantage of the offer - you're more than welcome!

'McCallum Crawford's debut novel is a Rabelaisian page-turner populated by the freakish, the devious, the deluded and the downright dirty...plot twists that make for a thrilling roller-coaster ride as our Hero works through his issues with the help of a rock band and some explosives.'

'...a nostalgic read for those of us of a certain age - the 80s wonderfully evoked, with story and dialogue somewhere between David Lodge and Irvine Welsh but a style and wit all of his own. Brash, flash and thoroughly entertaining. Recommended!'

'... a veritable cornucopia of action, humour and some great observational passages. This isn't just black humour, it is black hole humour; but you will laugh as oblivion beckons!' 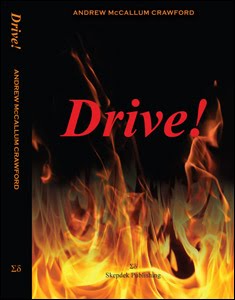 The book can be downloaded on Amazon co uk and Amazon com.
Posted by Andrew McCallum Crawford at 13:37 No comments:

The Next Stop Is Croy - free on Kindle

My collection, The Next Stop Is Croy and other stories, is available as a free download until Saturday. Do click on the link and have a look. 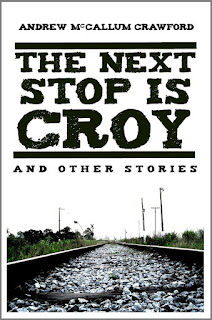 You can find more reviews of the book on Jim Murdoch's blog, The Truth About Lies, and in the Baltimore literary magazine, JMWW.
Posted by Andrew McCallum Crawford at 13:05 No comments:

Get yourselves over to Amazon - for a limited period, the eBook edition of The McCollection is available as a free download. 20 short stories from 20 Scottish writers. 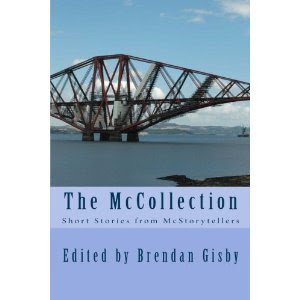 Available on Amazon co uk and Amazon com
Posted by Andrew McCallum Crawford at 21:52 No comments:

from Bang, You're Dead

It was the day before I left. I was sitting in the yard. There was nothing else to do. It was a big house. The whole family shared it. My brother-in-law’s children were running around, out of control. He shouted at them as he cleaned his shotgun. He was a hunter. He had all the kit, the camouflage gear, the cartridge belt, the boots, everything. He hated me. It wasn’t just that I was foreign, or that I wrote books. His big problem was that I couldn’t give his sister a kid. I wasn’t a man, in his eyes. Not just in his. People talk. They were talking so much I had started to believe them.
He pulled a brush through the barrel and looked at me, a sneer dancing along the ridges of his teeth. ‘Have you seen my gun?’ he said.
I looked dumbly at the thing propped on his knee.
‘Not this one,’ he said. ‘The other one.’
The basement smelled damp. No one went down there. He made a path through the junk and managed to open the rickety wardrobe in the corner. It was full of old blankets, which he pushed aside. He removed a green box. It was an ammunition case, even I could see that, like something out of Action Man, but full-size, metal. He pulled back the hasp and levered the lid open.
‘What do you make of this?’ he said, and came towards me with something wrapped in an oily rag. I don’t know much about guns. I don’t like being around them because I know what they are for. It was a revolver. He draped the rag over his shoulder and started tossing the gun from hand to hand. Then he did something with his thumb and the cylinder flipped out. It was full of bullets. ‘Here,’ he said.
‘No, you’re okay,’ I said. He wanted me to be impressed like a real man would. I wasn’t. I was wary of leaving fingerprints.
He sliced the cylinder with the side of his hand, making it spin. ‘I brought it back from Tirana when I finished a job there,’ he said. With a flick of his wrist the gun clicked shut. He raised it and pointed it at me. ‘They’re not blanks. You know all about them, eh?’
It wasn’t a toy.
He closed an eye. ‘Bang, you’re dead,’ he said.
My knees felt strange.
Hysterical yelps. He looked at the door. His children, in the house, coming down the stairs. He moved back to the corner.
‘Keep this to yourself,’ he said. ‘If you know what’s good for you.’
Posted by Andrew McCallum Crawford at 22:22 No comments:

The Skelf by Andrew McCallum Crawford

I was sitting having a pint with the brother. The pair of us were knackered, another ten-hour shift, then the hour’s drive back here. The Guinness was sliding down. No need to talk. That wee junkie walked in. The Skelf, they called him. I never gave him the time of day. Why would I? He headed straight for the toilet, in and out in a flash. He must have missed his appointment. The place was getting used as a shooting gallery. Nobody was doing anything about it. Christine was paid to pull pints, she wasn’t a bouncer. As for the regulars, all they were interested in was beer and television. They were oblivious to anything else...
The Skelf has just been published on McStorytellers  To read the entire story, click here.
Posted by Andrew McCallum Crawford at 13:23 No comments:

I haven't been able to access Facebook here in Greece since early this morning. It seems that it's not just Greece - it could be all Europe, it could be global. Looking at the tweets on the 'facebook down' sites is interesting. Most are humorous ('more time for coffee'/maybe we'll get some work done'/'the end of the world is nigh!'), but some people are beginning to voice concerns that this might have been caused by hackers.
Posted by Andrew McCallum Crawford at 08:50 47 comments:

One Absorbent Parasite Per Song by Andrew McCallum Crawford

He picked up the phone. ‘Neh?’ he said.
‘Cut the crap, Dave,’ said the voice on the other end. ‘Speak English.’
This was all he needed. He looked nervously round the room. That hunted feeling. The shutters were closed. ‘How’s it going, Joyce?’ he said.
‘Not good,’ she said. What a surprise. ‘You going down the Astoria?’
‘Don’t think so,’ he said. It was a quick decision.
‘Could you lend me a thousand?’ she said. ‘Just so I can get a Guardian and a coffee.’
Yeah, right. He barely had enough for the rent and she was asking him for a loan? She still owed him from the last time. She was into him for a lot more than a thousand drachmas.
‘Love to help you out, Joyce,’ he said. ‘But like I say, I won’t be in the Astoria.’
‘Fine,’ she said. ‘Another git cramps my lifestyle.’
This story has just been published in the March edition of the Scottish literary arts and culture journal, New Linear Perspectives. To read it in its entirety, click here.
Posted by Andrew McCallum Crawford at 10:15 No comments:

It was just off Byres Road, a cocktail bar. Popular with would-be pop stars and television presenters. Beautiful people. John, balding, in bottle-end specs and with a jumper tied round his waist, threaded his way through the crowd. Sniggers from the patrons. They didn't know John, not like we did. They didn't know he was the coolest man in the room. If they had, they'd have been all over him like flies.
Posted by Andrew McCallum Crawford at 12:06 No comments:

The first time is the worst, as if you have demolished something that took years to build. You are consumed with guilt. But nothing has fallen down. The guilt is still there, though. You do it again; there is a rationale. Mathematics - percentages, fractions. A problem halved, but you can never share it. It becomes a habit. The incidence increases while the fractions become smaller. You get to the point where you look forward to it, you enjoy it. You realise you are hooked. There is no going back now. Why should there be? You consider it your due. As for the guilt, that has tended to zero.
Posted by Andrew McCallum Crawford at 22:29 No comments: