He wrote a book. It was a minor hit. Nothing major. It got a handful of good reviews. It dealt with a defining moment in his life. This defining moment had to do with things falling apart. It was a roman à clef, which was irrelevant in the great scheme of things, seeing as he was a nobody. A minor hit. The names, as they say, had been changed. He didn’t want to hurt anyone, he wasn’t that type of person. In any case, the names weren’t important, it was the facts, the event. He hadn’t written the book to examine other people’s motives. He had written it to understand the past, to understand how the past had affected the way his life had turned out. Ailsa had read it. Of course she had. He’d made sure of that. Ailsa had inspired it. She had reappeared in his life, one of those twists of Internet fate, and he had found himself thinking of her and their relationship, which had lasted a few months and been over for decades. Inevitably, he had found himself thinking of the event. He began to write more and more, which was good, until it became one-track, monotonous; an obsession. He wrote about it till he wrote it out of himself. Catharsis. A fictionalised account. His book. But Ailsa wasn’t fictional. She was real. She existed. She wasn’t a figment of his imagination, like the past, or his version of it.
In the past, they had gone their separate ways. They were just kids. Maybe not kids, but they were young, that was the point. It’s all relative. It was years ago. When he left, he meant it, as far away from Scotland as he could get for a hundred and twenty quid. A one-way ticket, the big gesture, fuck yez, I’m off. It was her idea to meet up after all this time. He would never have suggested it; he had got her to read the book, anything else would have been pushing his luck. Things happen in life, things that define you. Things that make you buy a one-way ticket to the limit of what’s in your pocket. She’d been there at the defining moment. She hadn’t just been there in the sense that she’d been around, that she’d been his girlfriend. She had actually been present when the event took place, the pair of them sitting in his tiny room, a shirt hanging from the atmospheric curtain rail and a box of Bold under the wash hand basin. The minutiae. She was part of it. She had been at the address. That’s what the policemen had said when they showed up, talking into their radios, they were at the address. Okay, he had her on a pedestal. You carry things, you can feel the weight of them slowing you down. That’s the thing about thoughts – you try not to think them, but they follow you around, like shadows, growing darker the more light you shine on them.
He agreed to see her. He had reached the point where he couldn’t help himself. So much for catharsis. He wanted to see her so badly that he lied to his wife, on an international scale, which wasn’t as difficult as he’d imagined. He had business back home, he told her. She didn’t ask for details. They were due a break from each other. The place where he lived had become no less foreign over the years. He had no friends. Apart from his wife. She was his only friend. It was his choice. They shared everything. But this, now, this secret, was something he didn’t want to share. Not with her. It was something between him and Ailsa, no one else. It was as if he was playing a game, scanning the ground ahead, left, right and centre. There was a line that marked a boundary. He imagined it as thick and white, like a line on a tennis court. But this was no game. There were no rules, although there would be losers, eventually. He knew this. He also knew that no matter how hard he looked, he would never find the line, because the line was invisible, and he’d already crossed it.
It took five minutes to book the flights. He found a reasonably priced guest house in the West End, Haymarket. En suite, naturally, he was a man who liked his privacy.

He arrived very late in the evening, almost midnight, but they let him in. Despite the hour, or maybe because of it, he shaved. Staring at himself in the mirror, after he’d finished. He’d always had wrinkles, even as a young man, but now his eyes wore hoods of skin at the sides, as if he had grown tired of something, or someone. He twisted the tap till steam covered the glass.

He woke up sweating. He had dreamed of the mirror, and the face in it. He dressed quickly. He had to get out of the room. Edinburgh, this part of it, smelled of beer. Hops. As it always had. He purchased a bottle of his wife’s favourite perfume in Jenners. He could have got it cheaper on the way back, at Duty Free, but he didn’t mind paying full price. She was worth it. She deserved it.
He walked around the gardens, but knew he was just avoiding things. Back in the room he turned on the Internet. Ailsa hadn’t given him her mobile number. She liked her privacy, too. There was an email from her – the location of their rendezvous. They were to meet in a pub. He didn’t recognise the name, but it was in the Grassmarket. Edinburgh, full of markets, full of people selling things. The years move on, pubs close down and are replaced by other pubs. They were to meet in a pub. She was telling him she wanted to spend the evening getting stewed. Together, getting stewed. He found the idea appealing. Encouraging.

He had been ready for hours. He couldn’t sit still, he ended up fidgeting, pacing the floor. He felt stubble on his face. He braced himself for another shave. He cut himself, quite badly. He looked at his watch. He needed to give the cut time to heal. Balsam – he had forgotten to pack it, he should have got some in Jenners while he was there. It was an oversight, his own fault, like the cut. He checked his email, a towel pressed to his throat. Ailsa was just leaving home.

This story is taken from the collection A Man's Hands - link at the side of the page. 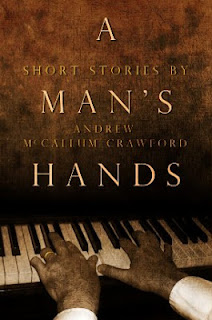 Posted by Andrew McCallum Crawford at 21:28